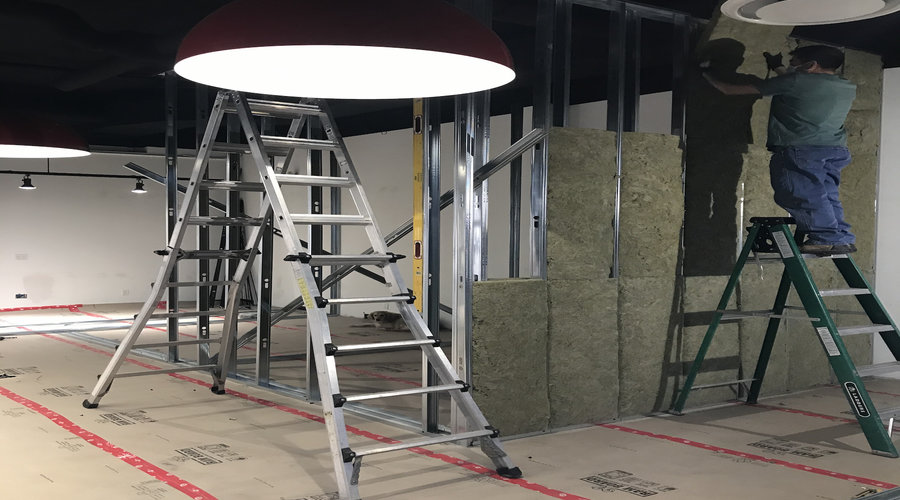 Over the years, (30 plus of them), I have built or had built dozens of rooms for music lessons. When I first started out, I didn't know anything about building walls that would effectively contain sound. And ... I'm so old that when I first started out, there really wasn't any internet to turn too. Yup, no YouTube!!! Suffice to say, my early lesson rooms were nothing more then regular drywall rooms which literally didn't contain a regular conversation, hey, we did our best with what we knew and our shoe string budget.

Then, a few years later, we moved and built some new rooms and we added some basic insulation and 5/8" drywall instead of 1/2". That was a few percent better. Then, a few years later we moved again and this time we built our rooms with better insulation and used 2 layers of 5/8" drywall. This was significantly better but still nowhere near what you would consider soundproof. Nonetheless, it was good enough to run 10 lesson rooms all running lessons at the same time. Definitely not perfect but manageable if everyone played relatively quietly.

Then, in that same facility we decided to build a drum room. This room was going to have to be a TON more soundproof if it was going to be able to coexist beside a piano room. So, I hired a contractor friend of mine who took on the challenge. Here is what we did ...

One of the walls was an external concrete wall so we didn't have to worry about that wall. The other 3 walls were built like normal except we built a second wall inside each of the walls about 2 inches inside. These second walls were completely independent of the outer walls, they didn't touch each other. Both walls had Roxul "safe n sound" insulation and 5/8" drywall. The space between these walls is pretty important as "air" and distance make a big difference when it comes to stopping sound waves. The added mass of the 2 x 5/8" drywall and 2 layers of insulation made a huge difference as well. For the wall with the door, each wall, the inner and outer wall had a solid core door. One that opened in and one that opened out. Now, all of this would be really good but we did one more very important thing. We built a sub floor inside the inner walls that did not touch the walls. It sat just inside the walls by about an inch. This sub floor sat on top of rubber pucks that we cut out of of sheet of industrial rubber flooring. The gap was covered by the trim. Having the floor separate from the inner wall that was separate from the outer wall made for a room that did not transfer sound waves well at all from the inside to the out. The end result, with both doors closed you could do your best Animal impression on the inside of the room and while you could hear it on the outside of the room, you could have a normal conversation immediately outside the door. This construction reduced the sound by a huge factor and made it possible for us to run drum lessons direction beside all of our other lessons with no issue.

Rooms are kind of like an acoustic guitar. Soundwaves vibrate which ever surface they are in contact with which in turn vibrate all of the other walls, ceilings and floors. These vibrations translate to sound on the other sides of all of these surfaces. The more breaks, mass and distance that you can put in the soundwaves way, the harder it is for them to get to the other side of the surface.

Fast forward to 2013 when we built our lesson studio in Oakville. We decided to try using a building material called resilient channel. Basically, this is a steel rail that you mount horizontally on your wall studs. Then you screw your drywall into these channels. This way, there are very few contact points between the drywall and the actual wall studs thus reducing the amount of vibrations that can transfer from one side of the stud to the other side and into the adjoining room. We also added insulation. Did it work? Yes, but not as well as building 2 walls with a gap in between.

Fast forward to 2021 when we moved to our new location in Etobicoke. This time we built the rooms with 2 walls with staggered studs and insulation between using 5/8 drywall. We also had a drop ceiling which we packed with 2 layers of insulation. The result.. best yet in terms of soundproofing. I would say that these rooms contain about 75% of the sound. So much that we can crank a big guitar amp and carry on outside of the room with no issue. The picture that goes with this blog is the construction phase of our current store for reference.

The moral of the story is that I clearly am not an soundproofing expert but I have had a lot of chances to try different things. Hopefully, my trial and errors will help you if you decide to build a room for music that you want to contain the sound in. Remember, mass (the thickness of the walls and insulation) and distance (the amount of air between walls) make all the difference in terms of how many db's you will be reducing on the other side of the wall. The thicker you can make the walls, having 2 or more walls and putting as much space as you can spare between them will make a huge difference. If you can build a sub floor and a insulated drop ceiling, all the better.